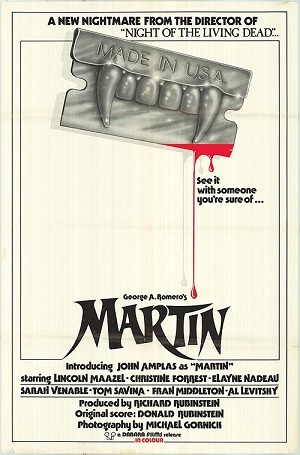 A Vampire for Our Age of Disbelief.
Advertisement:

Martin is an American horror film from 1978. It's probably George A. Romero's most poetic and melancholic movie, as well his personal favorite among his filmography.

A notable modern, skeptical, and unusually laid-back take on the Vampire myth and the lore and tropes commonly associated with it, the story centers on the titular character, who is convinced he is a vampire and moves with his cousin, Cuda, who is also convinced of this fact. He is clearly a serial killer and rapist; he murders women to drink their blood. But is he really a vampire, or is it all in his and Cuda's minds?

Not to be confused with the 1990s Martin Lawrence sitcom.