Fanfic / What Hath Joined Together 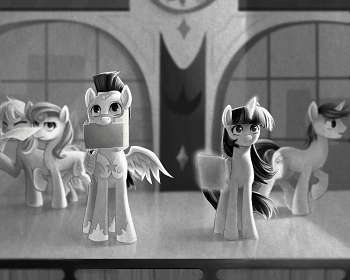 Like Paperman, except with ponies and racism and magic.

For the past few thousand years, Equestria remains a land living in harmony. Disorder breeds misery, so thanks to "the Order," society is structured so that never happens by ensuring every pony race remains in their own sphere, in livelihood and in love. Such is the way it has always been.

On the first day of Princess Twilight Sparkle's royal duties, the Royal Guard Flash Sentry finds himself assigned in her court. Unfortunately, Twilight's first day sees the noble unicorn Orion attempt something unprecedented: defying the Order to marry his childhood love, who unfortunately is an earth pony and therefore off-limits. Infuriated by Twilight's refusal to overrule the logical system, he attacks in a rage, but Flash Sentry quickly restrains the rogue.

During his debriefing, Flash makes eye contact with Equestria's youngest princess, and so begins the first urges of something extremely forbidden, but something they both desperately need. Will Flash's crush develop into something more, one able to shake the rigid society for the better, or will the Order of Equestrian society strike him down as it did to Orion?

, but due to overwhelming reader support, was expanded into a full story with What Hath Joined Together

. Timeline-wise, it starts near the beginning of Season 4.

, with Bad Seed 72's approval, has written a spin-off called No Sun-Queen Shall Rend Asunder

. It is an anthology of semi-canon one-shots set in the What Hath Joined Together universe. Plow and Stars Pony has also written a non-canon spin-off called Captain Iron Hoof's Dream of His Wedding Day

This fanfic demonstrates examples of: