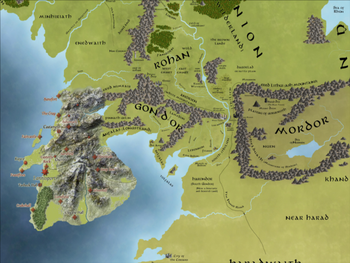 Good thing they weren't dropped off in the North, South or East, lest the name become confusing.

Hear Me Roar: The Lannisters in the War of the Ring

is a fanfiction written by Willy Walker Strikes Again that originally appeared on the alternatehistory.com forums. The premise is that the Westerlands and all its inhabitants (both former and current) are pulled to Middle Earth from near the end of Game of Thrones to the wastelands of Anfalas in Western Gondor in 3017 T.A. What follows is House Lannister adjusting to what is dubbed "The Arrival," affecting and being affected by this new world, for better and for worse.

Last updated in 2016, right as the Lannisters and Rohirrim march on Isengard.