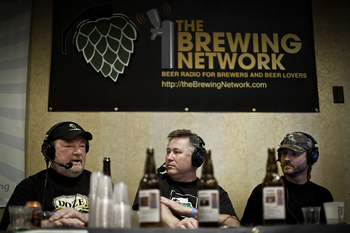 An episode of Brewing With Style being broadcasted at an event. In photo (L-R): Tasty Mc Dole, Jamil Zainasheff, Justin Crossley.
The Brewing Network is an internet radio station devoted to discussion about home brewing, craft brewing, and the brewing industry. Online since 2005, the network started with just one show, and expanded to its current lineup of eleven (eight of which are still active). All shows broadcast live, followed by archiving in podcasts. It is owned by Justin Crossley, though there are many people working to make the station work. It currently airs from The Hop Grenade, its affiliated craft beer bar.
Advertisement:

The Session (formerly The Sunday Session): The BN's flagship show, it is relatively long for podcasts (usually 3-4 hours long). When creating the show, Justin aimed to mix the breakfast radio format with long form interviews with experts and brewers to get the sort of information short interviews wouldn't garner. Episodes air four times a month on Mondays.

The Jamil Show: Brewing With Style (formerly Can You Brew It): The Jamil Show started as a show where Jamil Zainasheff and John Plise gave recipes for brewing to style guidelines. When they ran out of styles they changed to Can You Brew It. John left to be replaced by Tasty Mc Dole, and in this iteration they interviewed brewers to get the information required to brew clones of commercial beers. When they ran out of brewers willing to give them the information they needed, they swapped to Brewing With Style. John returned (described in the intro as a "special guest"), and they discussed styles, what they should taste like and commercial examples. It was cancelled due to Jamil working too much.

Lunch Meet (AKA "That Other Show"): The BN's rarely broadcasted and even more rarely archived off topic and politically incorrect show. Canceled because Justin got sick of doing it and the fans didn't donate $10,000 to keep it on the air.

There was a show broadcast on terrestrial radio, usually referred to as 'The Free FM Show'. Hosted on local radio station Free FM (with online streaming), it was hosted by Justin Crossley and Sean O'Sullivan.

Brew Strong: Hosted by Jamil Zainasheff and John Palmer, it is focused on technical issues in a more concentrated information format than The Session. Episodes were originally archived fortnightly (typically recorded two at a time), though now it's recorded whenever Jamil can find a space in his schedule.

The Homebrewed Chef: Chef Sean Paxton discussed cooking with beer as well as beer and food pairings. It was short lived due to difficulties with Paxton's schedule.

Dr Homebrew: Hosted by JP, listeners send in beer and have BJCP certified judges taste and give feedback while discussing the beer with the brewer. Frequently described on air as an "interactive BJCP Score Sheet".

The Sour Hour: Jay Goodwin of The Rare Barrel hosts this show that focuses exclusively on sour brewing. Updates monthly on Wednesday nights.

Heads and Tails: Hosted by JP and Beardy, this show focuses on craft spirits and distillation. Not that they do distillation at home, that would be illegal.

Bikes + Beer: The first show to broadcast from The Hop Grenade's Fort Collins location. Originally broadcast on local terrestrial radio, after it was cancelled it moved to The Brewing Network. The show focuses primarily on breweries and beer events in the Fort Collins area.

Shinerunner: Hosted by Mark Colburn, it focuses on marketing and distribution in the beer industry.

Hop and Brew School: Hosted by Justin Crossley and featuring people from Yakuma Hops, it's a show, as the name suggests, that focuses on everything hops including use in brewing and technical discussions of the compounds derived from hops.

The Brewing Network features examples of: