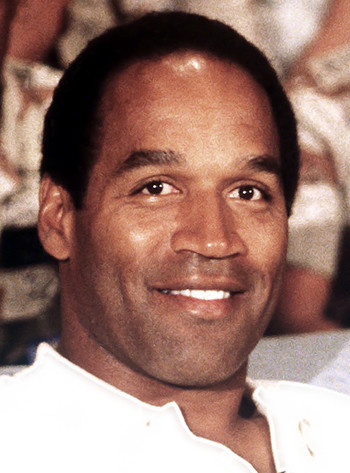 Growing up in San Francisco, Simpson had a troubled upbringing but managed to turn his life around, and went to the City College of San Francisco. Transferring to the University of Southern California, he participated in football and track and field, earning a Heisman Trophy in 1968. He soon went professional, playing for the Buffalo Bills from 1969 to 1977, and the San Francisco 49ers from 1978 to 1979. Over the course of his career, he set several records, becoming the first NFL player to rush for more than 2,000 yards in a season in 1973, and the only player to ever rush for over 2,000 yards when the NFL still used its 14-game regular season.

Following his retirement in 1979, he embarked on a somewhat-successful acting career, even founding his own television production company. He also worked as a commentator for Monday Night Football and The NFL on NBC, as well as endorsing many brands and products, most notably Hertz.

Of course, you probably don't know him for that.

In June 1994, his ex-wife Nicole Brown and her friend Ronald Goldman were found stabbed to death in the Los Angeles neighborhood of Brentwood. Simpson was named a person of interest, but he refused to turn himself in, instead leading police on a bizarre and infamous low-speed pursuit in a white Ford Bronco owned by his friend, Al Cowlings, before turning himself in after arriving at his Brentwood residence.

What followed would be called the "Trial of the Century". In the lengthy, high-profile trial that followed, Simpson was controversially acquitted on two counts of murder in October 1995. The verdict wound up splitting public opinion, and would go on to become an infamous episode in American history. In spite of the outcome of the trial (or perhaps even because of it), Simpson's public image was irrevocably damaged, and afterwards he was basically a pariah without much left in the way of friends, influence, or job opportunities, with the steep fees for his expensive legal team having eaten up the lion's share of his personal funds.

In the wake of the trial, the Brown and Goldman families filed a civil wrongful death lawsuit against Simpson in late 1996, which found him responsible for both deaths, and forced him to cough up $33.5 million, plus an additional $12.6 million to him and Nicole's children, Sydney and Justin. The outcome of the lawsuit cleaned out what Simpson had left of his fortune after the trial, and he ended up bankrupt and more-or-less destitute.

From that point forward, Simpson kept a relatively low profile, though not for a lack of trying to make some sort of media comeback, as he desperately needed money to pay his outstanding legal debts to the Brown and the Goldman families. In 2000, he moved to Florida, as it's one of the few American states where assets like pensions and homes can't be seized for civil debts in other states. In 2006, he attempted to get the Candid Camera Prank show Juiced with O. J. Simpson, which was clearly in the vein of Punk'd, off the ground, but it only managed to last for a one-off TV special.

Also in 2006, Simpson attempted to release a ghost-written book about the murders, titled If I Did It, which he claimed was a work of "complete fiction", which described the infamous crime from his point of view. For this project, Simpson briefly managed to get the media conglomerate News Corporation aboard as publishers, and even had them convinced to make a TV special to promote the book. News Corporation eventually jettisoned the project after complaints from the Brown and the Goldman families. Furthermore, as Simpson was still heavily in outstanding legal debt to the Goldmans, they managed to successfully sue him for the content of book as a way of working towards paying off said debt. The book eventually saw a release in September 2007 under the title, If I Did It: Confessions of the Killer, with the word "If" greatly reduced in size compared with the other words, and placed inside the word "I".

In 2007, Simpson was back in the spotlight when he was arrested for armed robbery and kidnapping in Las Vegas. Convicted in 2008, he was sentenced to 33 years in prison. He would go on to serve the minimum amount of less than nine years, before being released on parole on October 1, 2017.