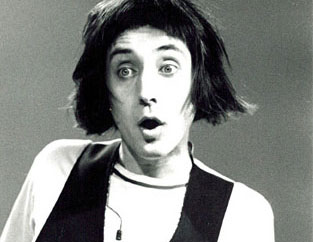 "Probably the toughest time in anyone's life is when you have to murder a loved one because they're the devil."
"I find you can often find humor just by turning something upside-down. Like a... small child."
—Emo Philips on Space Ghost Coast to Coast
Advertisement:

Emo Philips (born Phil Soltanek, February 7, 1956) is an Illinois-born comedian who is best known for his dark and surreal stand up routines, as well as his flat-out bizarre stage persona, which is characterised by a flutey, dreamy, almost childlike vocal tone, scruffy, mismatched clothing and excessive body language (he often walks with his arms held at right angles to his body, and then runs his hands through his hair whilst talking, if he's not struggling to assemble a trombone that he never uses). A lot of the humour comes when he merges this innocent character with Black Humour, much of which occurs when the audience least expects it. He is very good at twisting standard punchlines, taking a predictable end to a joke and swapping it for an unexpected and often very grim one.

As well as performing stand up comedy, he has acted in a few television series and films, appeared on UK panel show 8 Out of 10 Cats, and was the executive producer for the 1992 version of Meet the Parents.

He has also lent his unique vocal talents to Dr. Katz, Professional Therapist (as a version of his on-stage persona), Dooper in Slacker Cats, Shannon in Home Movies, a series of Bill Plympton-animated commercials for Sugar Delight and three episodes of Adventure Time as Cuber, the narrator for the Graybles episodes.

In the late 90s, he changed up his look and comedy style, ditching the trademark pageboy haircut and mismatched attire for a more conventional appearance, leading many journalists to comment on his "new grown-up image" and question him on his hair ("It's like having a child and you think, 'How can this child be any more the center of my life?' And then he's kidnapped.") He'd drop the new look by the end of the 2000s and has since returned to his old style.

Is famously close friends with "Weird Al" Yankovic and has appeared with him in several works, including Al's 1989 vehicle UHF, his 1999 video for "It's All About The Pentiums"

and a couple of episodes of The Weird Al Show. He was also the opening act for Al's 2018 live tour.

- and is a little miffed that most people don't know he wrote it.

In 1988 he married fellow comic Judy Tenuta, but the couple later divorced.

Not to be confused with Emo Teen, although to be honest, the risk of that is pretty low.

Tropes that apply to Emo Phillips:

"Other than that, though, it's been a good day."