Comic Book / The Sword Of Ardenois 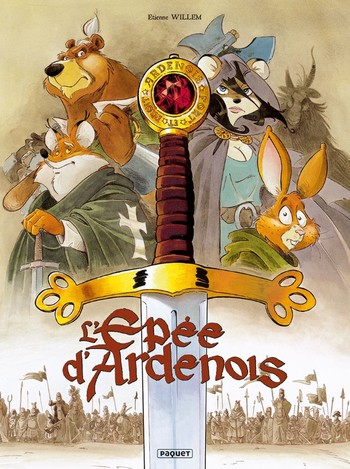 The Sword of Ardenois (originally published as L'Epee d'Ardenois) is an action-adventure comic book series written and drawn by Belgian artist Étienne Willem.

Set in a medieval Europe-like world inhabited by anthropomorphic animals, it tells the story of Garen, a teenage rabbit who is involuntarily dragged into a conflict rising between the neighbouring domains when emissaries of the evil sorcerer-warlord Nuhy return to the realm 20 years after his apparent demise. Witnessing his village destroyed and his friend, a retired knight who was crucial in slaying Nuhy, killed by his minions, he must now set out on a journey to help the legendary Dawn Brigade stop the new war before it's too late. And his old companion's weapon, the titular Sword of Ardenois, may be the key to their victory.

The series, originally published in French from 2010-2015, consists of four roughly 50-page volumes that together create an epic, multi-layered story that requires multiple readings to fully absorb and which, despite its Asterix-like art style, should not be read by anyone younger than teens due to its mature, often violent content.

As of mid-2019, the series has been published in France, the Netherlands, and Poland, and is currently a stand-alone title with no information on whether Willem, now creating other comic series, will ever return to the Sword's setting.

The Sword of Ardenois provides examples of: