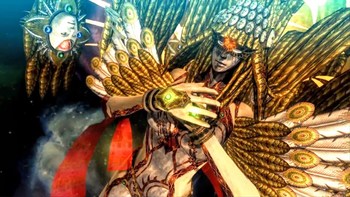 Seeing this is one of those awesome moments. Knowing Bayonetta's going to kill it is another.

Ahh, Bayonetta. From the Creator of the first Devil May Cry, Viewtiful Joe, and Ōkami, how could it not be an awesome game? Being the Spiritual Successor of Devil May Cry, it's expected to have moments like this, but it most definitely takes things to higher levels than usual.