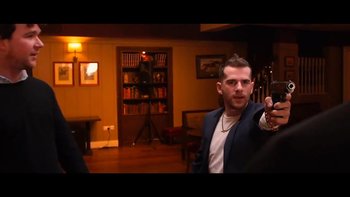 Gold Standard is a 2018 Irish short film written and directed by Zac Goold.

We're introduced to two dim-witted hitmen Fergal (Bobby Calloway) and Liam (Shane Martin). They're hired by crime lord Johnny Mac (Thomas Leggett) to murder a boy with a lot of debt. In the process of the murder, they're spotted by a parking attendant Tom (Jack O'Byrne) - who unbeknownst to them is Johnny's son.

Johnny orders the boys to kill the witness, not realising it's his own son. Also being dragged into the fray is Tom's sister and Johnny's daughter Amber (Vanessa Schaefer) - who also has a one night stand with Liam. Hilarity does not ensue.