Video Game / SNK vs. Capcom: The Match of the Millennium
aka: SNK Vs Capcom Match Of The Millennium 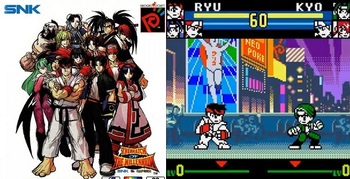 Corporate rivalries were never this adorable.
SNK vs. Capcom: The Match of the Millennium is the first fighting gamenote Technically the first game is Card Fighters Clash in the SNK vs. Capcom series (and part of the broader Capcom vs. franchise), developed for the Neo Geo Pocket Color and released in late 1999.
Advertisement:

The game has three different fighting styles: Average, a system reminiscent of Street Fighter Alpha that fills up and acts normally allowing for level 1 and 2 supers; Counter, which works by charging up your power gauge and allowing Level 2 supers when your health is low in conjunction with the full bar, exactly like The King of Fighters '94-'95 and the Extra Modes of '97-'98; and Rush which is a blend of the Versus and KOF '96-present (known as Advanced in '97 and '98) systems, but locks out level 2 supers. The single player Tournament mode could be played in a standard single character style, as well as in Marvel vs. Capcom-style Tag Teams or KOF-style three-on-three battles. In Tourney mode, the player would fight a certain rival halfway through, then a team of three clone fighters, a tag-team of Geese and Bison and finally, either Evil Ryu or Orochi Iori (only if you beat your rival beforehand, though), for a whopping total of nine stages.

It also features Olympic mode, a collection of minigames, which included many SNK and Capcom characters such as the Red Arremer and Arthur and Marco, Fio and Mars People. This mode allowed players to unlock extra super attacks for the main cast. Beforehand you picked either the SNK side or Capcom side and would be managed by either Rimururu or Karin Kanzuki respectively.

Alternative Title(s): SNK Vs Capcom Match Of The Millennium