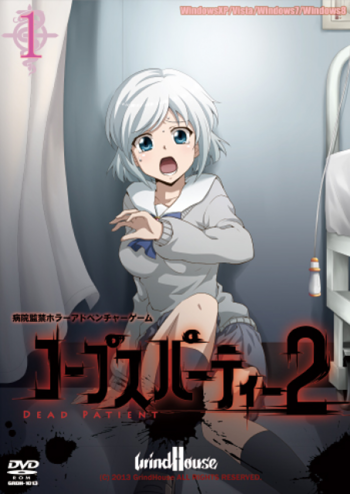 The first Numbered Sequel to Corpse Party, Corpse Party 2: Dead Patient focuses on a new central cast. The game is released episodically and the first chapter came out in Japan on May 29th, 2013. No other chapters have followed since and it has been announced that Dead Patient is receiving an overhaul to its game engine; the first chapter was redone, and all future chapters will be designed on this new engine.

Ayame Itou, a student of Minazuki Academy High School, has recently wound up at Amare Patriarcha Crucis Hospital. In order to cheer her up, her childhood friend Chiyomi's convinced several of their classmates from 1-5 to come along with her for a nice visit.

However, a surreal incident unfolds. Out of nowhere, a woman and her daughter suffer a brutal death... at the mother's own hands. And then, while those around them are still reacting with shock, the daughter leaps to her feet and starts screaming...

But Ayame's unaware of any of this when she wakes up. In fact, she doesn't remember anything at all. All she knows is that she woke up Strapped to an Operating Table, and as she tries to figure out what happened, she swiftly discovers that she and everyone else still trapped in Amare Patriarcha Crucis Hospital have been caught in a waking nightmare. Ghosts and corpses now freely roam the halls, and the living may prove just as dangerous...

According to developers, the game is being moved to a new engine, and the first chapter will receive a "re-branding" to fit with this; all subsequent chapters will be developed on the new engine. The revamped version of the game is known as Corpse Party 2: Dead Patient Neues, and the revamped version of the first chapter came out October 5th 2017.