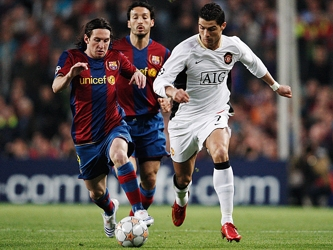 Let’s Rejoice In The Beautiful Game

.note Left to right: Argentine striker Lionel Messi, Spanish midfielder Xavi, and Portuguese striker Cristiano Ronaldo in action in the 2008 UEFA Champions League semi-final between Spain's FC Barcelona and England's Manchester United FC.
It was elegant. It was beautiful. The game should be beautiful, like a well-executed war.
— Mr. Nutt, Unseen Academicals
Advertisement:

Association Football is the most popular sport in the world. It's more commonly known as just Football, although, in some parts of the English-speaking world, particularly North America, it's referred to as Soccer, a word that's often used to avoid confusion with American Football, Rugby Football, Gaelic Football, and Australian Rules Football.note (although derided in the UK as a crass Americanism, the word "Soccer" is in fact of British origin — it's an abbreviation of "asSOCiation" that was coined to distinguish the code from Rugby Football, aka "Rugger", making it one of the large number of British slang words ending in "-er"; Wikipedia has an entire article on the subject

Played in over two hundred different countries, the game has captured the attention of billions of people; The World Cup is one of the most widely viewed sporting events on Earth, up there with other major soccer competitions like the European Championship, the UEFA Champions League and the English Premier League. The only other sports events that get close to soccer numbers are the Super Bowl, the Cricket World Cup, and the Olympics. Which has the highest numbers depends on how you count and is Serious Business.

The game is played between two teams of eleven players, one of whom is a goalkeeper. The team which scores the most goals in a match wins; a goal is scored by putting a ball into a net at the ends of the field with any part of the body except the arms or hands. The game is governed by the Fédération Internationale de Football Association, or FIFA for short. Along with the English, Scottish, Welsh, and Northern Irish associations that make up the International Football Association Board (IFAB), FIFA codifies and maintains the Laws of the Game, the rules by which the game is played that date all the way back to the mid-nineteenth century.

Footballers at the highest level are extremely well paid, especially in Britain. As of 2019, the average wage of a Premier League footballer is £60,000, and the median wage is £50,000 per week.note For those not up on statistics, the median is the point on a distribution in which half of the examples are above it and half are below it. They are also frequently stereotyped as being complete morons, something not helped by the fact that a lot of players come from more deprived areas, start their careers in their mid-to-late teens, and are consequently not all that well educated. That said, a number of footballers have proved to be highly intelligent, usually going on to become managers. However, others play it very, very straight.

In many parts of the world, football is Serious Business. Not for nothing is the page quote for that trope made by one of England's most celebrated football managers. Many established sides are far more than one hundred years old, and the traditions around these clubs have become something of a religion to those that follow them. Although this can often be a negative force — Football Hooligans is a trope for a reason — the universal nature of the game has also been associated with bringing down barriers and establishing common cause in even the most unlikely of places.

For instance, it played a role in establishing peace in Sierra Leone, as well as in the historic Christmas Truce between British and German soldiers in World War I that involved a game of football. It is the largest sport in the world in terms of the total amount of money invested in it. The largest football team is the Northern English side Manchester United, who are coincidentally also the most valuable sports franchise in the world, edging out the Dallas Cowboys and the New York Yankees over the course of the last decade. Going by Man U's own figures, they boast a staggering six hundred million "casual fans" worldwide (in other words, twelve hundred times the population of Manchester and ten times the population of the UK, or roughly 11% of the world population as of 2011).

If you still don't believe in the game's importance, look up the very concrete effects it has had on politics and history. For example, the Ultras in the Egyptian Revolution of 2011. Or the 1969 Football War between El Salvador and Honduras. For a more high-profile example, look up "das Wunder von Bern". Perhaps the most famous example is the Christmas Truce between the Germans and the British during World War I, when both sides left their trenches to play football. Something similar would happen in the notoriously brutal Nigerian Civil War, when both sides agreed to a two-day ceasefire so they could watch Pele's touring Santos team play some exhibition matches. And in November 2015, three days after the Bataclan gun attacks in Paris that left around 129 dead, the French national team was due to play England, their oldest and bitterest rivals, at Wembley Stadium, the home of English football. When they turned up to play, they found Wembley lit up in the colours of the French tricolour with the motto of the Republic blazoned on the side, the traditional giant St. George's flag formed from cards held up by fans at one end of the stadium had been replaced by a French tricolour and when the anthems began after the traditional minute's silence - impeccably observed - the English fans enthusiastically joined in singing 'La Marseillaise', the French national anthem and (appropriately) a stirring battle hymn. The French clearly loved this: in June 2017, the two met in a friendly match in Paris and the hosts returned the favour due to the Manchester Arena bombing and the London Bridge/Borough Market attack in the month preceding the match.

One of the reasons the game is so popular is the simplicity to learn and play it when compared to other sports. All you need for a game are a ball, some flat ground, some way to mark the goals (hence the memetic "jumpers for goalposts"), and an evenly divided group of players. It’s also fairly light on physical contact making it much safer and less prone to arguments than its more aggressive cousins.

Football in the UK:

Football in the Americas

Football in Asia (includes Australia, which is a member of Asia's football governing body)

Football in the rest of the world

What to do at a football game: