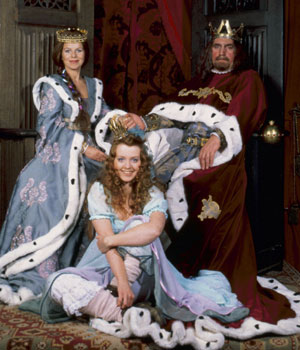 Kulderzipken is a Flemish television series, written by Hugo Matthysen and well known for its absurd humor, wordplay and its fairytale atmosphere. It had two seasons and ran from 1995 to 1997, but there are frequent reruns on the Flemish children network Ketnet.
Advertisement:

The protagonist is a simple farm boy, named Kulderzipken, who earns a stay in the castle of King Jozef after accidentally winning a competition. The first season focuses on King Jozef's attempts at coming up with "impossible tasks" to kick Kulderzipken out of his castle to prevent his daughter Prieel from falling in love with him.In the second season, the marriage between Prieel and Kulderzipken is being prepared, while King Jozef teaches his son-in-law all there is to know about being a king.

Other recurring characters were Queen Angina and the Brothers Grimm. Usually, each episode included a different set of guest characters visiting the castle.