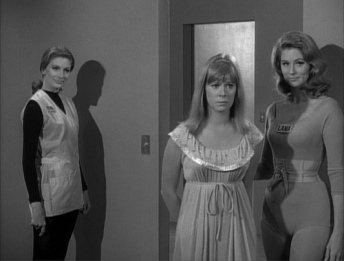 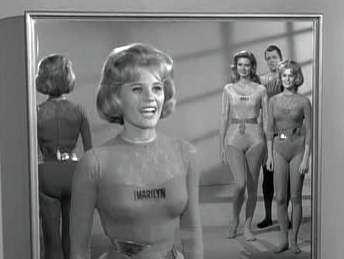 Foreground: Marilyn, after.
Rod Serling: "Given the chance, what young girl wouldn't happily exchange a plain face for a lovely one? What girl could refuse the opportunity to be beautiful? For want of a better estimate, let's call it the year 2000. At any rate, imagine a time in the future in which science has developed the means of giving everyone the face and body he dreams of. It may not happen tomorrow, but it happens now...in the Twilight Zone."
Advertisement:

A woman named Lana Cuberle debates the merits of two images of perfect, beautiful women on a screen, number 8 and number 12. Her daughter, Marilyn, wasn't listening. As it turns out, Lana is trying to help Marilyn decide which pattern for "The Transformation" she will become. Instead, Marilyn was looking wistfully at an old scrapbook of her mother's, showing what Lana looked like before The Transformation. Lana talks about how wonderful everything became once she decided to look just like number 12. Marilyn has her doubts. Her uncle, who chose number 17 when the time for his own transformation came around, tries to talk it over with her, but she remembers her father and his individualistic ideals. Uncle Rick is quick to remind her that he was also a number 17.

Eventually, Lana takes her to see Dr. Rex, also a number 17, and he goes through a big speech about how it's okay for Marilyn to be so anxious about The Transformation. How could she stand another minute of living such a horrid, ugly existence? It's perfectly norm-oh wait, she doesn't want it? Well, it is of course totally voluntary. No one will force you to become transformed, they will simply find whatever it is that makes you not want it and snuff that out. Rex sends her to Professor Sig, also a number 17, who continues to assure her the change is not compulsory, but that such "smut" as the nonsense of Shakespeare, Keats and Dostoevsky should not cloud her judgement. Those things were banned a long time ago, along with the physical and emotional ugliness of the past. Why shouldn't Marilyn undergo The Transformation and never again suffer a wrinkle or anything else that isn't curable with a glass of Instant Smile? But Marilyn persists with her delusions of the value in not looking the same as everyone else or being happy all the time, until Sig has a nurse commit her with "a mild sedative."

Lana visits, along with Marilyn's friend Valerie. Marilyn tries to tell them that "They" are lying and that The Transformation isn't something left to choice. The women don't understand, who are They? and why is Marilyn so upset about the change when all they want to do is make her beautiful and happy? Valerie doesn't get why Marilyn is so wrapped up in what her father used to say—he's dead and she's had almost a dozen different fathers. (People have lots of those nowadays.) Marilyn goes into a fit, saying that her father was Driven to Suicide by The Transformation because of how his identity was taken away and wonders if Valerie can feel anything at all. Valerie insists, of course she can; she feels good, always, because life is pretty, life is fun, she is all and all is one. Marilyn develops a Madness Mantra in response: "You can't understand! You can't understand! You can't understand!"

Later, Marilyn tries to make a run for it, passing yet another number 17 orderly along the way. She stumbles into Dr. Rex, where her fate is sealed. She has "chosen" number 8. Lana and Valerie meet the new Marilyn, who is free of all her doubt and worry. She admires herself in a mirror - life for her is now just as perfect, fun and pretty as it is for Val, as it is for Lana, as it is, presumably, for everybody.

Rod Serling: "Portrait of a young lady in love...with herself. Improbable? Perhaps. But in an age of plastic surgery, bodybuilding and an infinity of cosmetics, let us hesitate to say impossible. These and other strange blessings may be waiting in the future, which, after all, is the Twilight Zone."