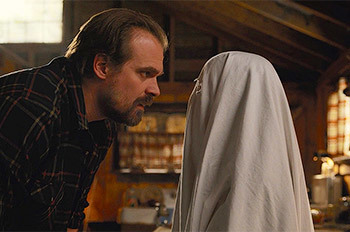 In a flashback, Eleven awakens in the Upside Down middle school, having just destroyed the monster at the end of the first season. After escaping the Upside Down, she goes to Mike's house but find it swarming with government agents looking for her. To avoid them, she hides in the woods.

In the present, Eleven asks to go trick-or-treating. Hopper says it's too risky, but promises her to be home early with candy so they can celebrate Halloween together. However, while working, he learns the strange blight has spread to farms all over town, and spends all day investigating it, and eventually has to break his promise.

Dustin and Lucas tries to recruit Max for the party, inviting her to hang out with them on Halloween. While a bit skeptical of them, she doesn't outright reject the idea.

Nancy wants to tell Barb's parents about her death, but Steve insists it's too dangerous. At a Halloween party that evening, Nancy gets drunk and tells Steve she doesn't love him. Angered, Steve leaves, and asks Jonathan to take her home.

The party go trick-or-treating dressed as Ghostbusters, and are joined by Max. While Lucas and Dustin are excited to have her with them, Mike is greatly annoyed by her presence. But the quest for candy is suddenly cut short when Will has another vision of the shadowy monster from the Upside Down trying to catch him. Mike brings the shaken Will home to discuss his visions, during which he admits to him that he is still trying to contact Eleven.

Frustrated with Hopper breaking his promise, Eleven tries to contact Mike but fails. When returning home, Dustin finds that the noises from his trash can was caused by a strange creature hiding in it.