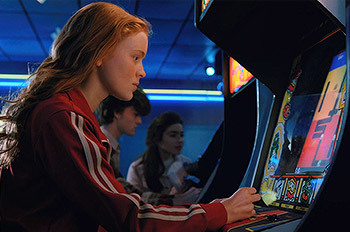 On October 28, 1984, a gang of teenagers commit a high profile robbery in Pittsburgh. The police pursue them through the streets, but the gang is successful in getting away when one of the members uses psychic powers to aid their escape. A wrist tattoo marks the member as "008."

The party meet up the Hawkins arcade, where Dustin is upset to learn that someone with the moniker "MADMAX", has toppled all of his highscores. Meanwhile, Will has a vision of the Upside Down, seeing a violent storm approaching in the distance.

Journalist Murray Bauman is snooping around Hawkins, having heard rumors about Eleven and her powers, believing that he is on the heels of some sort of conspiracy involving a secret Russian weapon. Hopper, knowing better, tries to discourage Bauman from looking deeper into the matter, while he himself investigates a mysterious blight on Bob Merrill's pumpkin patch.

Mr. Clarke introduces a new girl named Maxine ("Max") to his class. Dustin and Lucas do a little investigation, and find out that she is the "MADMAX" from the arcade, making them interested in recruiting her for the party. They decide to do this behind the back of Mike, who has been in a really bad mood ever since Eleven's disappearance.

At Hawkins Lab, the new head scientist on duty, Dr. Sam Owens, examines Will after his vision. He tells Joyce that Will is probably just experiencing post-traumatic stress disorder. Joyce, meanwhile, has gotten a new boyfriend, Bob Newby, a mild-mannered technician, who Will has taken quite a shine to, while Jonathan is more skeptical.

Nancy and Steve have dinner with Barb's parents, who reveal they are selling their house to pay for Bauman's investigation into Barb's disappearance. Nancy is haunted by guilt over this, knowing her late friend's true fate but being unable to reveal the truth to her parents.

Dustin hears a noise from the trashcan outside his home. Back at home, Will has another vision, seeing an enormous spidery creature in the Upside Down.

Hopper goes home to a cabin in the woods, where Eleven accuses him of being late.