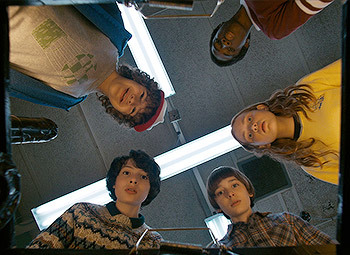 Dustin feeds the creature he found in the trashcan a 3 Musketeers chocolate bar and names it d'Artagnan ("Dart").

In a flashback, Hopper leaves food in the woods for Eleven, and eventually she approaches him. Hopper moves her into his grandfather's old hunting cabin, telling her it is the safest place for the time being. In the present, Hopper refuses to allow Eleven outside, telling her that it is still not safe. Angry with his stalling, she leaves the cabin during the daytime and goes looking for Mike.

Bob recounts a childhood nightmare to Will and encourages him to stand up to his fears. Nancy persuades Jonathan to help her tell Barb's parents the truth. She arranges a meeting with Barb's mother in a local park the next morning.

Hopper confronts Owens with evidence that the blight comes from the lab. Owens reluctantly agrees to look into it.

Dustin brings Dart to school and shows it to Will, Mike, Lucas, and Max. Will realizes Dart is from the Upside Down. As the party argues about what to do with Dart, he molts and escapes into the school, necessitating a search. Eleven, meanwhile, happens upon Mike and Max as they are looking for Dart. Looking at them from a distance, she sees them arguing and mistakes it for flirting. Jealous, she makes Max fall off her skateboard.

On a videotape Will made while trick-or-treating, Joyce discovers an image of the monster.

Will finds Dart, triggering a vision of the Upside Down. Dustin recovers Dart, but keeps it secret from the others. Following Bob's advice, Will confronts the monster, but it invades his body.