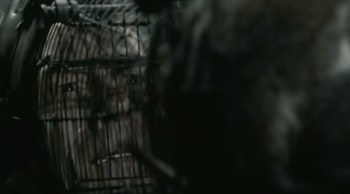 "DO IT TO JULIA!"
When you're reading a book about a society whose highest goal is to be "a boot stamping on a human face — forever," it's hard not to find something that unsettles you to your very core.
Advertisement:

If you want a picture of the future, imagine reading the Nightmare Fuel pages — for ever.