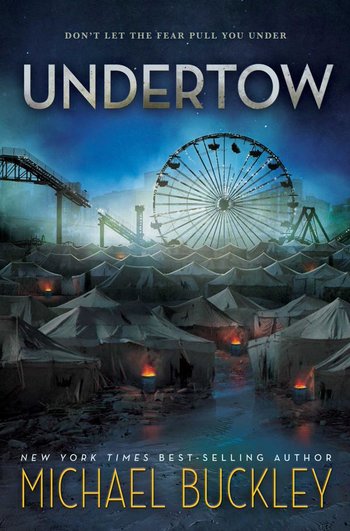 Undertow is a dystopian fantasy/science fiction trilogy of novels by Michael Buckley. Told from the viewpoint of Brooklyn teenager Lyric Walker, it shows a world turned upside down by the arrival of a species of violent aquatic humanoids on the shores of New York's Coney Island. These "First Men" or "Alpha," as they call themselves, come in subspecies named after a variety of beings from folklore: Sirena, Ceto, Nyx, Selkie. But the names is where the resemblance to the friendly creatures of myth end. Coney Island is transformed into a virtual prison as tense government authorities wait to see what the newcomers intend and human supremacist street gangs begin to appear. Making matters worse for Lyric and her family is a frightening secret that they have been living with since long before the Alpha came. But when the government agrees to integrate Alpha children into Lyric's school, Lyric is thrown into the middle of the inter-species standoff and all of her dark secrets begin to float to the surface.

The first book in the trilogy, Undertow, was released in May 2015. Its sequel, Raging Sea, followed in February 2016. The final volume, Heart Of The Storm, is scheduled for a Spring 2017 release.

The first book of this trilogy contains examples of the following: