Just For Fun / Man Getting Hit by Football 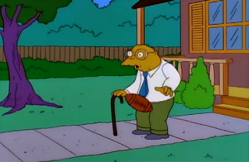 Ouch!
"The ball! His groin! It works on so many levels!"
Springfield Film Festival judge's review

Man Getting Hit by Football is a classic short film made by and starring Hans Moleman, created for a film festival in his small town of Springfield (the creator never told us which one). The premise is simple, it's about a man getting hit by a football. The film was not well-received when it was released.note Well, except by one judge, who loved it. However, it went on to be Vindicated by History, getting itself a successful remake which earned George C. Scott an Oscar.

The original can be viewed here.

The George C. Scott remake can be viewed here.