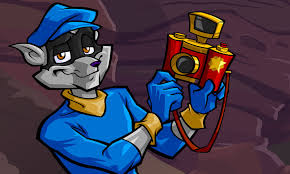 We can probably all tell where this is going.
Advertisement:

Sly's games tend to steal our breath as much as Sly... well... steals.

Sly 2: Band of Thieves
A Shadow From The Past (Cairo)

He Who Tames The Iron Horse (Canada, Part 1)

Sly 3: Honor Among Thieves
An Opera Of Fear (Venice)

Rumble Down Under (Australia)

I Smell A Rat (Paris Prologue)

Of Mice and Mechs (Medieval England)