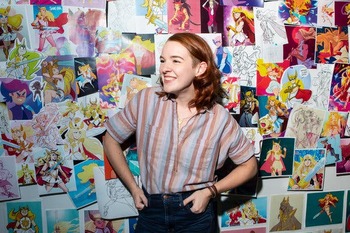 ND Stevensonnote Formerly credited as Noelle Stevenson (born December 31, 1991 in Columbia, South Carolina) is an American comic-book writer and artist, as well as cartoon writer, who came to prominence as the creator of NIMONA and co-creator of Lumberjanes, though he’s most well-known for developing She-Ra and the Princesses of Power for Dreamworks Animation.

Before Nimona and Lumberjanes, Stevenson came to prominence on Tumblr for his "Broship of the Rings

" drawings and comics, reimagining The Lord of the Rings characters as modern day people on a road trip. In 2020, Stevenson published a collection of his autobiographical comics, titled The Fire Never Goes Out.

They're married to Molly Ostertag, artist of Strong Female Protagonist and author of The Witch Boy series.

On 2021's Trans Day of Visibility (which occurs on March 31), ND came out as transmasculine and bigender

, and goes by he/him, she/her, and they/them pronouns.

A friend of theirs got Aaron Paul to call her a bitch. Yes, really.