An easy-going, sunglasses-wearing nun with the so-called Church Of Violence. Revy's confidante and only friend. Also an undercover agent for the CIA. 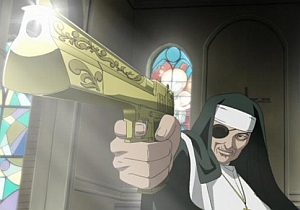 Voiced by: Akiko Takeguchi (JP), Shirley Millner (EN)
"My dear, you could learn a thing or two from that young man, you know. In the end, waving your gun around doesn't work. You'll never do good business like that."

Leader of the Church of Violence. Very likely has a background in intelligence herself, as she is fully aware of Eda's status, and acts as an informant/confidante to her. But they might just have some kind of deal with the CIA.

Eda's assistant and a newcomer in the Church Of Violence, who makes his debut in the "Greenback Jane" arc.