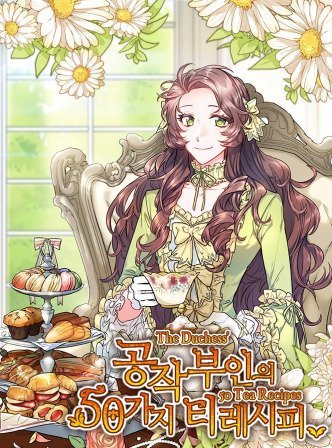 Can you brew tea for me again?
"Before I woke up in this body, I loved drinking tea. Tea was my only comfort through my 28 years of life under everyone's scrutiny. Even if my boss lectured me endlessly, a cup of tea could make me happy for a while."

A Webtoon/ manwha by Ant Studio, based on the light novels of the same name.

Park Hajeong is an overworked accountant in South Korea with no friends or family, whose only comfort in life is brewing the perfect cup of tea. On the day Hajeong is fired from her terrible job, she drinks herself into unconsciousness and winds up isekai'd into the life of one Duchess Chloe, lady of the noble Vandenberg House and wife of the dashingly handsome Duke Alphonse. Living the life of a Duchess should be a nice change of pace for poor Hajeong, except for the fact that Chloe is dismissed by her cold husband, disrespected by the manor's servants, and disliked by all her "friends" in the kingdom's upper class. The old Chloe was a timid, insecure woman who let everyone mistreat her for fear of being hated. The new Chloe isn't going to put up with that.

Determined to make the best of her situation, "Chloe" makes her first request of her husband since their wedding day over a year prior: she'd like some tea. Her request raises some eyebrows because in Chloe's world, the nobility disdains Hajeong's beloved tea as a bitter, barbaric beverage. Anyone who can afford to drinks coffee or wine instead. But Chloe isn't going to let that stop her from enjoying her tea, and sharing it with anyone willing to try some.

Chloe's newfound confidence and passion put her on track to rebuild her reputation and regain the respect of her household. Her personality shift also catches the eye of her husband, who makes a request of his own: he'd like Chloe to brew him this strange new drink. Will Chloe be able to win over even the cold Duke's heart with a warm cup of tea?