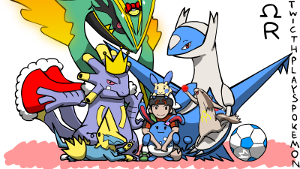 Twitch Plays Pokemon. Still doesn't know if it's Darker and Edgier or Lighter and Softer. Also cannot count to six.note There are seven Pokemon in the image, because Rayquaza was added during post-game.
Source

Twitch Plays Pokemon Omega Ruby, the tenth run of the series, is the first to launch simultaneously with the public release of the game being played, namely Pokémon Omega Ruby, the remake of Pokémon Ruby. Just about all players will be playing along on their own handhelds or experiencing the game for the first time through Twitch and at least the first few days will be both spoiler and strategy free note except for carry overs from the original Ruby and Sapphire as these are remakes. Set in the Hoenn region, the run is sure to feature plenty of nods to the Emerald adventure while exploring new features on a real 3DS.

The run began on November 21, 2014, the same day Pokémon Omega Ruby and Alpha Sapphire were released worldwide except for Europe. Champion Steven was defeated on November 28th, 2014, followed by a run of the postgame "Delta Episode" which was then completed on November 29th, 2014, with wifi-enabled postgame following.