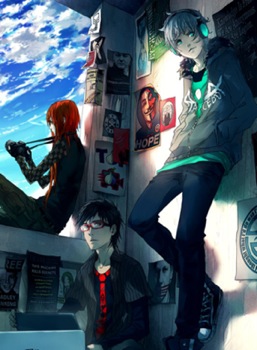 From left to right: Robin, Vance, and Frey.
"Through the distorted lens I found a cure."
— Tagline

is a webcomic on Deviant Art by Yuumei. In the fictional country of Central Eastern Republic ("CERia"), a young man named Vance Lee decides that he's been missing out on something. Something that porn simply can't replace. A girlfriend, to be more specific. And what better way to get a hot girl than to hack into his university and assign himself one for a roommate? According to Vance, apparently none. Little does he know though, that this little "harmless" action would end up changing his life forever. He never does end up getting that hot roommate and instead, gets roped into some crazy conspiracy to overthrow the totalitarian regime that their country is under rule of; courtesy of his most-definitely-not female roommate.