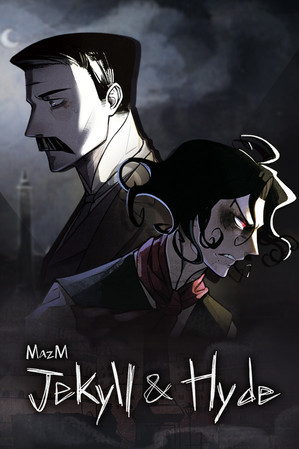 If he calls himself Mr. Hyde...
Jekyll and Hyde is a Visual Novel that's part of the Maz M video game series that reinterprets well-known works of classic literature with stylized art and gameplay. In this case, it's based on the Robert Louis Stevenson Gothic novella The Strange Case of Dr. Jekyll and Mr. Hyde, developed in 2013.
Advertisement:

The game follows each of the main players - Mr. Utterson, Dr. Jekyll and Mr. Hyde, and others - in the streets of Victorian London, as the story gradually unfolds to the reveal that pretty much everyone and their grandma already knows about nowadays, but also expands upon the original story with additional scenes. Along the way, you solve puzzles and interact with people to piece together the whole story before reaching the tragic conclusion.

Then I shall be Mr. Seek The Tropes: