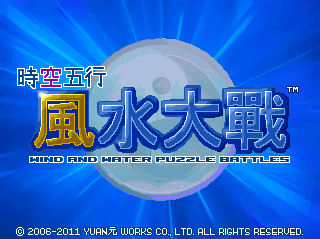 Wind and Water: Puzzle Battles* (simplified Chinese: 时空五行-风水大战; traditional Chinese: 時空五行-風水大戰; pinyin: Shíkōng Wǔxíng - Fēngshuǐ Dàzhàn, lit. "Wu Xing Space-Time - Great Feng Shui War") is a 2007 block-matching puzzle game developed by Yuan Works, a company based in Costa Rica. It was originally released for the portable GP2X and got a 2008 port for the Dreamcast and a 2011 port for PC.

The general rule in the game is to swap the element-themed blocks around and match a minimum of 4 of the same color in a diamond shape, clearing any gems of the same color next to them and opening the way for chains to rack up more points. The game can be played in three modes with different ways of scoring large combinations and chains.

The game has a robust story mode involving a girl named Amy on a quest to recover the five elements and recruit people for a puzzle tournament, while the developers' avatars try to keep her from finding the game isn't quite feature-complete yet. It also has a puzzle mode in which the player must clear the board in a limited amount of moves.

The freeware PC version of the game can be downloaded here

It had a successful Greenlight campaign for a 2017 re-release on Steam with an online versus mode.