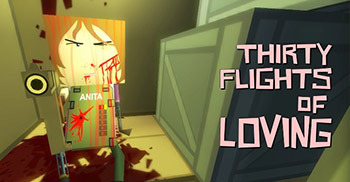 Thirty Flights of Loving is a 2012 Environmental Narrative Game, and the sequel/Spiritual Successor to Gravity Bone, with which it now comes bundled. In it, you start off playing as an unknown man, who is planning some sort of heist with co-conspirators Anita and Winston. And then things get weird. It is focused on abstract, non-linear storytelling and often credited being the first game to introduce jump cuts into the gameplay itself, which inspired spiritual successors of its own, such as Virginia. However, this came at the price of further stripping down the already limited gameplay mechanics in Gravity Bone's, often reducing the player's role to simply walking from the start of one scene to the transition point where it cuts into the next.