Can you reach the Goddess and redeem your soul? 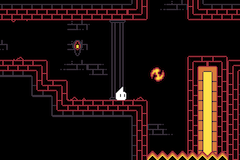 is a platform game where you play as a lone spirit on a quest to reach mysterious Goddess and ask for forgiveness for his past sins. Unfortunately the Goddess hates him, and is trying her hardest to keep him from reaching her by stealing his various body parts, along with various skills with them, making the game more difficult.

This game contains examples of