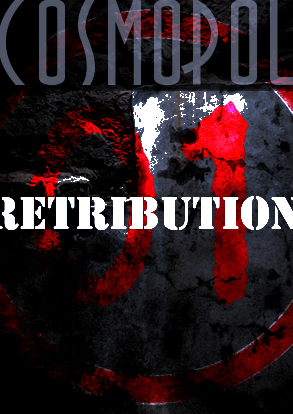 Viva La Résistance!
"Why am I here?

Because as much as I despise this smoke-filled poisonous choking pile of bricks, I'm not ***ing letting anyone turn it into their own personal little empire."
Keller of the Zero One
Advertisement:

Retribution is the third setting in the Cosmopol RPG universe, taking place roughly fifteen years after the introduction of the first setting.

Contrary to the branding (the title "Cosmopol"), the action is dominantly set in the considerably gloomier city of Neustadt.

In contrast to the other two settings' dominantly capitalistic, mercenary and adventure-based themes, Retribution casts the player characters as members of the Zero One organization, which has become an armed resistance movement after previously being a loose-knit brotherhood of playful hackers.

After a genetically-engineered Neohuman government based in England has seized much of Europe, Neustadt finds itself split between these forces and the equally cruel, anti-"Gene Job" Mechanist government and finds itself the key prize whose taking will mean a decisive turn in the war.

Attempting to free the city, sometimes against crushing odds, is the Zero One... who have now found that the Assembly and the Mechanists are not their only problems.

Tropes in this System: