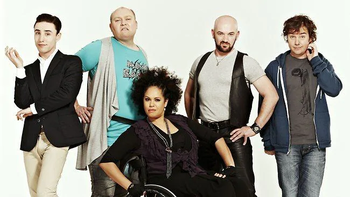 Dylan: "So you're all queer sci-fi geeks?"
Rae: "Generally I prefer the term 'enthusiast'. And 'science-fiction'. And 'homosexualist'."
Advertisement:

A comedy about a gay science fiction fan club. In the closet, no one can hear you squeal. Outland is a six-part australian television series that aired on the ABC in February-March of 2012. It follows the lives of five homosexualist science-fiction enthusiasts as they try to establish a new group following the breakup of the original larger fanclub, the Gay and Lesbian Fantasy League.

No relation to the 1981 film Outland. Or to the successor comic to Bloom County. Or to the 2011 Metroidvania-lite game.