Series / One Step Beyond 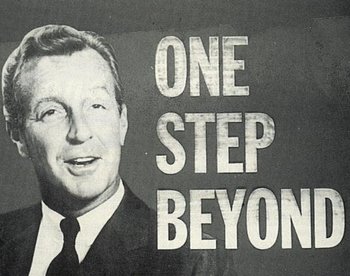 “The amazing drama you’re about to see is a matter of human record. You may believe it or not, but the real people who lived this story –- they believe it. They know. They took that one step beyond.”
—John Newland's Opening Narration
Advertisement:

One Step Beyond, also known as Alcoa Presents: One Step Beyond, was a TV anthology show created by Merwin Gerard that aired on ABC. It predated its better-known competitor The Twilight Zone (1959) by nine months (it premiered on January 20, 1959; Twilight Zone debuted in October). It was hosted by John Newland, who referred to himself on camera as "your guide to the supernatural" (he was also the series' director).

Like The Twilight Zone, the series presented stories that were supernatural and eerie in nature. Unlike The Twilight Zone, the show claimed to be a Docudrama; every spooky episode was (supposedly) inspired by true events and was presented as a reenactment. Topics included death premonitions, astral projection, ghosts, Psychic Powers, unexplained phenomena and strange coincidences.