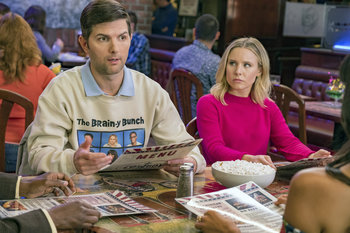 "God, I'm just so happy to be here...if that makes sense."
"It's gonna take a lot more than that to break up this group."
— Michael

Trevor has joined Chidi and Simone's study, posing as an unlikable and overeager test subject in order to drive Eleanor, Chidi, Tahani, and Jason away from each other. Michael and Janet are determined to stop him. After a few tests in Simone's MRI machine, Trevor drags the group to an America-themed restaurant where he insinuates that Chidi being friends with his test subjects will skew the results, correctly predicting that Eleanor will get disheartened when she seemingly fails to dissuade him. He also schemes to get Tahani and Jason to hook up so Tahani will leave the group in disgust. However, these plots fail when Tahani is actually charmed by Jason's behavior and stays, while Chidi goes to Eleanor's motel room, admits that they're friends, and brings her back to the study group.

Gen orders Trevor, Michael, and Janet to return to her chambers, expressing anger and disappointment at Michael's continued meddling in human affairs. Trevor tries to kiss up to her, which annoys her enough to get her to banish him into the void with a wave of the hand and forbids Michael and Janet from returning to Earth, saying that now the humans will have to get into the Good Place on their own merit. However, all the items Janet attempted to summon back on Earth appear and block her way; this distraction (and Jeff the Doorman handing them the key) allows Michael and Janet time to escape through the portal down to Earth.