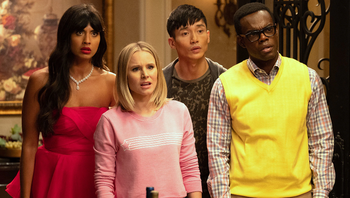 Michael and Janet are stuck on Earth, not daring to go back to the Judge's Zone as they're afraid of Gen's wrath. With nothing else to do, they decide to hide in an abandoned part of the university Chidi works at and continue to monitor the four humans' progress. They get Eleanor a winning lottery ticket to give her the funds she needs to stay in Australia, and set Tahani up with her ex-boyfriend Larry Hemsworth in order to stop her from hooking up with Jason.

About a year later, Tahani announces that she and Larry are now engaged, and that they'll be moving back to England. Chidi and Simone acknowledge that this is a natural stopping point for the study. Upset about losing the first group she's ever connected with, Eleanor lashes out at Tahani's engagement party, but a talk with Simone puts it into perspective. Eleanor goes back inside to apologize to the rest of the Brainy Bunch, and they resolve to continue staying in touch and reunite once every year.

All this time, Janet and Michael have been attempting to manipulate events to keep the group together, to no avail. Frustrated that the group is breaking up, Michael resolves to sneak back into the Judge's chambers and reset the timeline despite Janet's protests. However, before they can go, Chidi, Jason, Eleanor, and Tahani find them opening the door and demand to know what's going on.