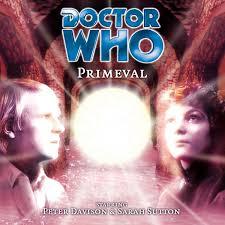 Just why did Nyssa collapse at the end of "Four to Doomsday"? Anyone saying "because Nyssa hadn't been made a companion yet when the serial was written" — shh, that's the Doylist reason. This story gives a Watsonian explanation: The Fifth Doctor isn't sure, either, and it has him worried — so he takes he back to her home planet, Traken.

Traken being unavailable in the present (the Master accidentally destroyed it in "Logopolis"), the Doctor opts for Traken several thousand years before Nyssa's time; before even the Keepers. There the foremost healer of the day, Shayla, diagnoses Nyssa with acute exposure... to evil.

The Doctor barely manages to stifle a snicker at this diagnosis, but Shayla is being perfectly serious. She goes off to inform the High Council about the young woman dying of evil poisoning and the off-worlder responsible for it. The Doctor is really not laughing now. The High Council isn't either, and prepares to kick Nyssa and the Doctor off the planet again. The Doctor gets into a religious debate about the subjective nature of evil before remembering his good manners. Since everyone on Traken is guided, garded and healed by the Source, the Doctor assumes that it's a mystical nonsense artifact. It turns out to actually be a supercomputer, which shields the planet from any kind of interplanetary contact (barring some essential trade). Religion is not only unknown on Traken, but actively banned, and all the old temples have been converted into utility buildings. While Nyssa relaxes in a temple-turned-spa, the Doctor lets Shayla smuggle him off-planet and into the base of a very evil warlord named Kwundaar, who supposedly can help Nyssa fully recover.

Kwundaar instead makes the Doctor scream like a child just by looking at him, gives him a high dose of Mind Rape, steals his memories, and uses those to set his invasion plan into motion. The Doctor manages to escape (as he finds out later, with the help of one of Kwundaar's officers) and he and Nyssa leave Traken as quickly as possible, change into swimming gear, sneak into the Source via the spa and change the planetary shield level to maximum. Fortunately, this works. Unfortunately, it was exactly what Kwundaar wanted them to do, since the shield now allows him in but no energy out. He immediately invades the planet. The Doctor is knocked out cold, but manages to tell Nyssa the new security code he entered for the Source.

Kwundaar turns out to be the ancient God-king of Traken, who 2500 years ago gave the primitive Trakenites technology in the first place. They used that knowledge to create the Source, decided that religion was silly, and kicked Kwundaar out of their planet. Now that he's come back, the Traken council members feel like a right bunch of idiots and decide to convert to him again, hoping it'll stop him from massacring the whole planet. (It doesn't.) Kwundaar eventually reaches the Source and uses Nyssa's mind to enter the code... only to find out that the Doctor had told Nyssa a different code, which directly links the Source's data to a specific mind when activated. The Doctor immediately becomes the first Keeper of Traken and defeats Kwundaar, although the warlord promises that more of his kind will come back to kill the Doctor someday. Nyssa decides to take that risk, promises the Doctor that she'll continue to travel with him, and Shayla becomes the second Keeper of Traken.