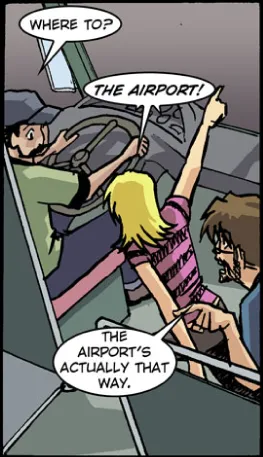 "To the Bat-Poles! First we'd better get outfitted with our Bat-...Stuff."
— Ryan Stiles, Whose Line Is It Anyway?
Advertisement:

Few Bat-things can seem so anti-climactic as characters going Bat-somewhere or entering a Bat-vehicle, but there's always a way of doing things dramatically. Simply make a character yell (with or without his arm up):

The first usage of this trope was on 1960s Batman (1966) series (Does "To the Batmobile!" sound Bat-familiar?), and it was parodic even then. Most appearances of it nowadays are even more so, as the character will be overly dramatic about, say, going Bat-downstairs to eat bat-something. Thus, it's a Dead Unicorn Trope.

Rest assured if there's anything distinctive about someone's car, fans will dub it the InsertNameHere-mobile.

See also Hyperaffixation (where a car becomes a batmobile and a pole becomes a batpole), Mundane Made Awesome (where average activities are exaggerated to become more impressive), Product Placement (using a real-world product's trade name), and To the Batpole! (where the characters reuse a costume change montage to prepare for the conflict).

open/close all folders
To the Comic Books!
To the Comic Strips!
To the Fanfics!
Advertisement:
To the Films!
To the Literature!
To the Live Action TV!
To the Music!
To the Professional Wrestling!
To the Sports!
To the Video Games!
To the Web Comics!
To the Web Original!
To the Western Animation!
Tune in next week! Same Bat-Time, Same Bat-Channel!

Alternative Title(s): To The Batwhatever