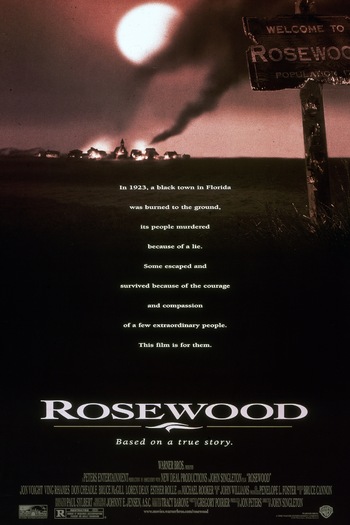 Rosewood is a 1997 American historical drama film directed by John Singleton. While based on historic events of the 1923 Rosewood massacre

in Florida, when a white mob killed blacks and destroyed their town, the film introduces fictional characters and changes from historic accounts.

Ving Rhames stars as Mann, an outsider and WWI veteran who comes into Rosewood and inspires its residents to self-defense, wielding his pistols in a fight. The supporting cast includes Don Cheadle as Sylvester Carrier, a resident who witnesses—and defends his family from—the riot; and Jon Voight as John Wright, a sympathetic white store owner who lives in a nearby village. The three characters find themselves entangled in an attempt to save people from racist whites attacking the blacks of Rosewood.

Tropes in Rosewood include: