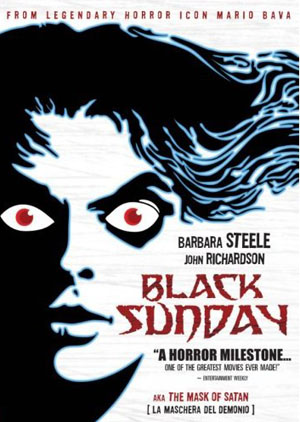 A 1960 Italian horror classic directed by Mario Bava. It was his first film where he received actual credit for his work. It was an (extremely loose) adaptation of the short story Viy by Nikolai Gogol. The movie's style, cinematography and story harkens back to older Gothic Horror films of the 1930s. Black Sunday (originally titled La maschera del demonio, "The Mask of Satan") itself would go on to influence later films such as Tim Burton's Sleepy Hollow (1999) and Bram Stoker's Dracula.

In 1640, the Moldavian Princess Asa Vajda is captured and executed by her brother for practicing witchcraft and being a vampire. As she is about to die, she curses the descendents of her brother. Two hundred years later, Dr. Kruvajan and his assistant Dr. Gorobec, travel through Moldavia. After their carriage breaks down the two stumble across the tomb of Asa, whose corpse wears a metal mask and coffin is guarded by a cross. Kruvajan is attacked by a monstrous bat and kills it. However, he accidentally breaks the cross, cuts his hand and drip some blood on the body. Asa is resurrected because of the blood and begins to wreck havoc upon Moldavia and her brother's descendants.

Not to be confused with another movie about... a blimp. Also see Black Sabbath, another Mario Bava horror movie with a similiar title.