Fan Fic / For Tomorrow We Die 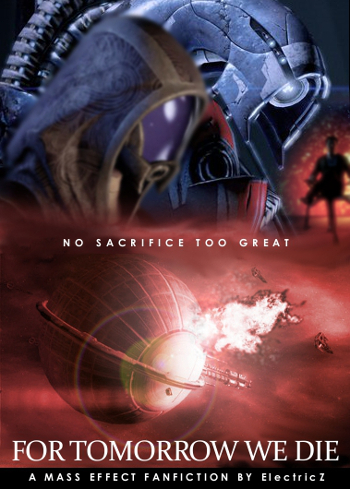 That guy in the background sure looks like he's up to no good.
"For Tomorrow We Die"

is a Mass Effect fanfic telling the story of a well-intentioned attempt to broker peace between the quarians and geth that has far-reaching consequences not only for the involved parties but for the galaxy at large. Following the events of Mass Effect 2, the collectors have been defeated beyond the Omega Four Relay, and the Normandy SR-2 is trying to make its way home after suffering severe damage in the battle. The quarians and geth are on a path to reconciliation after centuries of war, but circumstances and prejudices render the peace process difficult at best and impossible at worst. Neither the quarians or the Citadel are trusting of the geth, and the fact that a rogue Spectre in service to Cerberus is behind the plan does nothing to ease tensions. Complicating matters, the clock is ticking on the inexorable return of the reapers.

For Tomorrow We Die contains examples of: