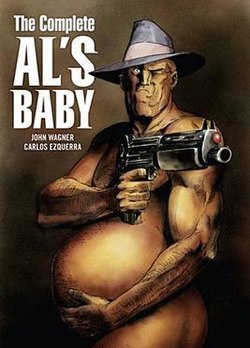 Set in a 20 Minutes into the Future American locale called only "Chi-Town", believed to be Chicago, it revolves around badass hitman Al "The Beast" Bestardi, and his misadventures in motherhood.

In the original "Al's Baby", Al is told by his elderly father-in-law, Don Luigi Sarcoma, that Al is in trouble; he's been married to Sarcoma's daughter Velma for two years, and still they haven't had any children. Despite Al's protests that Velma refuses to have kids, Don Sarcoma gives him an ultimatum: get him a grandson, or he'll bump Al off and find Velma a new husband who will. Such is Velma's selfishness that, in the end, Al's only hope is to undergo an experimental regime that allows him to carry the baby to term instead of Velma. Which is kind of complicated when a full-blown gang war erupts in Chi-Town whilst he's pregnant.

Finally, in "Public Enemy No. 1", Al has to go into hiding to wait for the heat to cool off after his killing spree in "Blood on the Bib". Which he's fine with... but not so fine with Don Sarcoma "insisting" that Al gets pregnant with a second child whilst he's doing it.