open/close all folders
The Wizard

The Player Character. They were visiting the Museum of Lanova when the Insignia of Legend transported them through time to the Chaos Trials.

Artisan Andres
A craftsman who sells relics, items that provide various effects to those who hold them. He usually sells them in Lanova Square for gems, but he may occasionally be found in levels selling them for in-dungeon use for gold.
Virtuoso Iris
An artist who sells arcana, magical cards containing paintings that are drawn from chaos. She is mostly seen in Lanova Square selling arcana for gems. You may also buy them when you meet her in the Chaos Trials for gold, temporally expanding your spell pool along the way.
Savile
A tailoress who sells outfits that modifies a wizard's stats. She can also alter the current effects of your current outfit in Lanova Square for 5 gems, or enhance its effects within the dungeon for 100 gold. Be warned that as she still has a long way to go, you'll take damage from her latter service.
Nocturne the Cardist
A card-dealer with a collection of enhanced arcana. By handing a random standard arcana, he shuffles his hand and you may pick one of his card in return. He also appears in Lanova Square, randomizing your arcana and relic for 10 gems.
Advertisement:

Jade
A noblewoman decorated with jewels who is looking for Chaos Gems. She will buy 20 of them for 200 gold.
Mah-Lind
A veteran who used to take part in the Chaos Trials. Knowing the Trial Council well, participants may pay him 10 gem to request starting with the dungeon they were previously defeated in.

Nox the Unfortunate
A shady, cloaked figure who provides one of the three relics, free of charge. Said relic has a downside, however.
Doctor Song
A medical researcher who is studying the long-term effects of using arcana. If you offer her a standard arcana, she will give you an exclusive relic in return.
Taffy
A living piñata. If you damage it with a combo strong enough in 5 seconds, it will burst open, leaving behind an arcana.
Creme the Collector
An archaeologist looking for ancient treasure, for this case, mystical relics used in the Chaos Trials. If you drop the current relics you have in front of him, he'll accept them in exchange for gold.

Coffin Knight
Coffin Knight are armored beings who specialize in crushing combatants. They each carry a large stone over their heads. Once an entree is in sight, they will jump and slam their stones on them.
Ghoul
The ghouls are shadowy, lean humanoid figures. They chase down combatants and attack once they are within reach. In later levels, they occasionally gain a temporal speed boost, allowing them to reach their opponents easier.
Golem
Golems are gigantic monsters made of rocks. Sluggish in their movement, they walk towards the combatant before attempting to strike them.
Orb
Variants: Rush Orb, Guardian Orb, Shooter Orb
The orbs are purple spheres. They are normally called to battle by Summoners, but they can be encountered on their own, too. The Rush Orb dashes into combatant(s) in a straight line. The Guardian Orb has mini-orbs that moves around it for protection. The Shooter Orb attacks with magic bolt.
Slime
Additional Variants: Huge Slime, Enhanced Slime, Chaos Slime
The slimes are little blob-like creatures. Slow, weak, and almost harmless, they hop onto the combatant to deal damage. In later levels, however, they split into smaller versions of themselves upon defeat, making this enemy harder to get rid of.
Turret
Additional Variants: Flower Turret
The turrets are mini-poles, each with an eye resting between their forked protrusions. If there are any entree in sight, they will shoot a magic bolt at them. 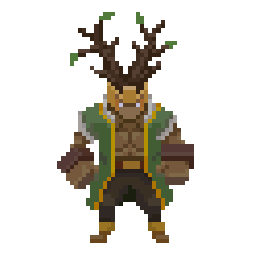 "I hope your trip here hasn't been too terra-ble... because you're about to get crushed!"

An earth-elemental specialist who is in charge of the Living Courtyards, the earthen section of the dungeon.
Flame Empress Zeal 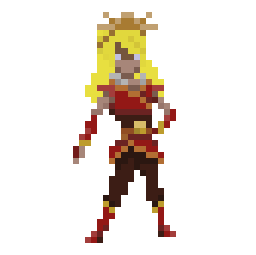 "Are you warmed up yet? Because I'm bringing the heat!"

A fire-elemental specialist who is in charge of the Burning Furnaces, the fiery section of the dungeon.
Frost Queen Freiya 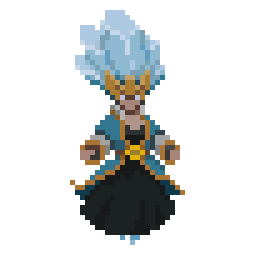 "It's too late to be getting cold feet... because I'm about to freeze you in your tracks!" 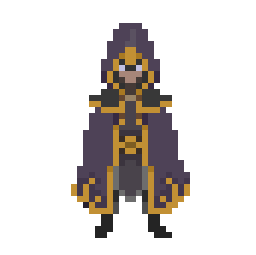 The head of The Magic Council, and the last opponent standing before the Wizard of Legend title.