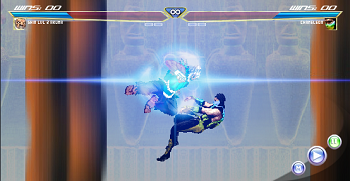 We know what you are all thinking, but sadly, this is not a Mortal Kombat/Street Fighter crossover fighter.note Even though Ed Boon said he was very interested in making one, Capcom... is not.

Mortal Kombat vs. Street Fighter is a three-episode series of Flash sprite-animations by Proxicide. Quality-wise, it's some of the best entertainment flash animation can provide, with a great amount of filters and effects. It could be compared to Alvin-Worm-Jim's Super Mario Bros. Z, but more action-oriented with less of an emphasis on plot.

The first episode is set in the aftermath of a dimensional portal being opened between the MK and SF universes and a furious battle that ends with both Shang Tsung and Shao Kahn being taken down by the SF universe's strongest fighters, and Outworld without a ruler. Raiden ascends to the throne and goes Drunk with Power, leading the other warriors in killing most of the warriors of the SF universe, including the two fighters who took down Shang and Kahn. The battle of this episode has Raiden facing off against Ken, one of the few surviving Street Fighters, who seeks to avenge the fallen and save Chun-Li, his Love Interest, from becoming Raiden's next victim.

The second episode, which is not in continuity with the first, has Ryu and Sakura and Scorpion and Liu Kang discovering a portal that leads to each other's dimensions while in the midst of fighting each other (Ryu and Sakura's fight being practice, and Scorpion and Liu Kang's being the regular MK fight to the death). Ryu promised Sakura that he would retire and settle down with her after his last tournament fight against Akuma, but when he tries to destroy the portal with a Hadoken and accidentally takes out Liu Kang, Scorpion is pissed. After sending Sakura away to warn Ken about what's going down, Ryu steps through the portal to confront Scorpion and face his destiny.

The third and final episode focuses on the relationship between Ryu and Akuma immediately following the events of the second episode. Unable to cope with his feelings toward Ryu, Akuma heads off to face his problems alone, smashing through the barrier between dimensions and coming face to face with Chameleon, who has a certain score to settle with Akuma.

All three parts of the series can be seen on Newgrounds.

NOT TO BE CONFUSED with the Fan Fic The Unofficial MK Vs SF Saga.