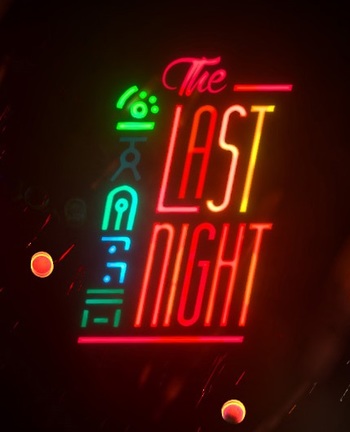 on itch.io. It was developed by Odd Tales, a team composed to Tim and Adrien Soret. It is playable here.

Starting out 20 Minutes into the Future, the player arrives at at a train station in what appears to be Paris. His contact informs him of his target who will be at a local nightclub. From there the player treks across part of the city, shooting down some police drones in the way, in order to finally reach the entrance to the nightclub.

Due to positive reception, Odd Tales began work on an expanded version of the game, with the addition of more staff. Adrien would later leave the studio in December 2016 to pursue his own endeavours.

The game was late revealed at E3 2017 with what can only be described as 8X8i-bit graphics; take a fully animated 3D video game city, and replace every detailed speck with a pixel, but keep the depth, lighting effects, and fluid animations. The end result is what you'd expect video games to look like if they were forced to use 8pixel art by law but unrestricted in everything else. The game focuses on a man named Charlie, who can't interface himself with the virtual lives of the city thanks to a childhood accident, being given the opportunity to take matters in his own hands. The game was planned to release in 2018, but suffered a delay due to funding issues.

Tropes present in both versions of the game:

Tropes present in the 2014 version: