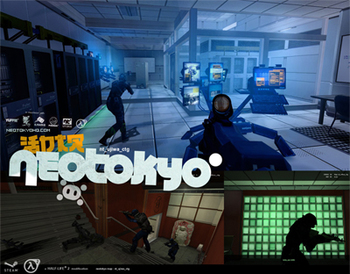 Not to be confused with New Neo City, nor with the film of the same title.
Advertisement:

is a Half-Life 2 mod inspired by Ghost in the Shell. If that alone doesn't convince you to try it, just keep reading.

NEOTOKYO takes place about 30-40 years from now in a Japan that has drifted into social/political strife due to the inevitable stresses that come from changing times. The Japanese government is grappling with intensified external (Asia geopolitics) and internal (economic/social) problems, and there is mounting pressure from within Japan to return to the days when it exerted influence through military power and strength. A failed legislative push to alter the Japanese Constitution (allowing the Japanese Self-Defense Forces to engage in offensive actions outside of the country) leads to an attempted military coup by members of the JSDF. The coup fails, but was very close to succeeding. In an effort to suppress further coup attempts, Japan's Prime Minister forms a branch inside the Interior Ministry's National Security Forces (NSF) called Group Six. They answer directly to the Prime Minister and are sworn to protect the Japanese Constitution at all costs. They immediately begin to hear rumors of a rogue element of the JGSDF special forces unit called Jinrai, maneuvering for a second coup attempt. These Jinrai are part of the Special Operations Group 43 (SOG43), fierce nationalists who desire to put Japan back into a position of strength and power.

This begins the war in the shadows between the NSF and Jinrai.

Gameplay is divided into rounds, similar to Counter-Strike. At the beginning of each round, all players choose a class. There are only three classes, but each class represents a huge variety of gameplay styles and tropes. They are:

This is a team-based game, so it's essential that all three classes work together. To aid this, players can divide into squads; you can always see where everybody else on your squad is, and how much health they have at all times, making it easier to coordinate your efforts.

There are two gameplay modes:

Another distinguishing feature of NEOTOKYO is the omission of a directional damage indicator. Hits taken will make your whole screen flash red without telling you where those shots come from. Inattentive players and disorganized teams will be going down FAST.

The mod is approved by Steam Greenlight and officially released on Steam in July 2014.