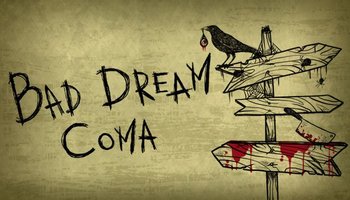 Which will you choose?
Advertisement:

Bad Dream is a series of Point-and-Click Psychological Horror games created by Desert Fox, taking place in various dream scenarios with a heavy dose of Surreal Horror. The games present an interactive environment, with most of the objects being able to be interacted with, for better or for worse for the player (and usually, for the worse).

The original series of games were Butcher, Graveyard, Hospital, Cyclops, Memories, and Bridge.

After a couple of years, Bad Dream: Coma was released as a full game connecting all the previous games into a story. The game takes place in a coma dream, with the player transverse the areas of the original series. Death has become absent, and the people in the dream are suffering without her. With the help of a mysterious masked man, the protagonist navigates a disturbing dreamland where the world changes based on your actions.