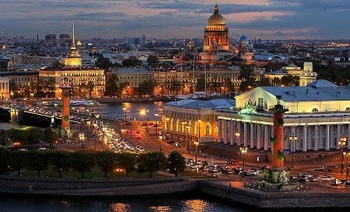 "I'll take the first train to St. Petersburg,
there's nowhere else I'd rather be."
— Havalina Rail Co., "Red and Blue (in St. Petersburg)"
Advertisement:

St. Petersburg, Russian Federation. Formerly Leningrad. Before that, Petrograd. Before that, St. Petersburg. Before that, Nyenskans. It is, alongside İstanbul, one of the premier examples of Please Select New City Name.note Note that several other major cities (and probably many smaller ones) have reverted to their pre-revolutionary names. Gorkiy became Nizhniy ("Lower") Novgorod and Sverdlovsk became Ekaterinburg. Volgograd, however, has not become Tsaritsyn again, and some people want to go back to Stalingrad. The only major city to retain its communist name is Kaliningrad, in the exclave of the same name. This is because the area (North-Eastern Prussia) and the city (Königsberg) were part of Germany until the Second World War and all towns and villages there were given Russian and Soviet names even when they had West Slavic (usually Polish) or (more commonly) Lithuanian names before. There actually is a Russian law to prevent the post-1945 Soviet names from being changed. There has been a real debate about changing Kaliningrad's name back or to something else, nevertheless, and it is often called "Kyonig" informally.

The second city of Russia, Sankt Peterburg was actually the capital of the country until shortly after Red October. Both revolutions centered around here. The Russian Navy cruiser Aurora

fired the first shots of Red October and is now preserved in Saint Petersburg as both a museum ship and the ceremonial flagship of the Russian Navy.

As a result of its history, the city contains quite a few palaces. The Mariinsky (or Kirov) Ballet, regarded as one of (if not the) premier classical ballet companies in the world, is based in the city. Also resident in the city is its associated school, the Vaganova Academy of Russian Ballet; founded in 1738 as the Imperial Ballet School, the Mariinsky and its school remain the heart of the Russian ballet tradition to this day.

It is also home to the Leningrad Optical Manufacturing Organization, or LOMO, famous for rescuing film-based photography from extinction, and for (at least formerly) producing some of the finest high-end precision optical instruments, ranging all sizes, in the world. Directly neighboring the LOMO factory is a hospital owned by LOMO, where they hired Russia's best medical doctors in each specialty, to get direct feedback from them on their prototype medical optical instruments. For this reason, throughout the history of the Soviet Union, the city of Leningrad's name was synonymous with top-of-the-line medical care. LOMO also used to make telescopes which were highly sought-after on both sides of the Iron Curtain. Sadly their quality control of late has declined, somewhat.

Gazprom, Russia's largest company by revenue, is headquartered in St. Petersburg. It is one of Russia's four Fortune Global 500 companies (the other three are based in Moscow).