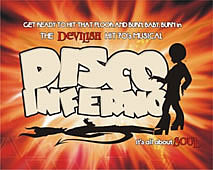 Disco Inferno is a 1970s-style musical set in 1976. It features really cheesy songs written in the 1970s, including A Night to Remember, Hot Stuff and the titular Disco Inferno (the one which features the memorable phrase "Burn Baby Burn"). The musical is loosely based on the story of Faust.

The story follows Everyman Jack, who has a great life — a girlfriend who loves him and a good job in a nightclub called Disco Inferno. But he dreams of being a singer. One night, he makes a Deal with the Devil and signs his soul away for a life of fame and popularity. At first it seems as if all his dreams have come true, but things swiftly fall apart. Due to his arrogance, he loses his girlfriend and eventually kills his best friend. Jack repents in front of the entire funeral congress, just as his rival, Heathcliffe, shoots him with a gun given to him by the devil. Jack wakes up in the nightclub and finds out that everything has gone back to the way it was before he signed the contract. It turns out that there was a get-out clause that, because Jack repented before he died, the contract was void.