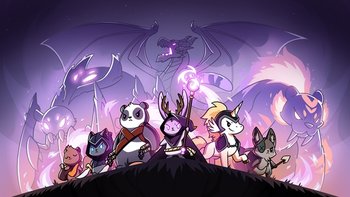 Aww what a cute little kitty....OH S*** it has knives!
Here to Slay is a 2-6 player card game by the creators of Unstable Unicorns. Players compete to be the first to assemble a party of six Heroes with different types, or to slay 3 monsters.
Advertisement:

The game was originally funded through Kickstarter, with numerous exclusive cards and accessories provided to backers.

There are five types of regular cards:

There are two types of oversized cards: