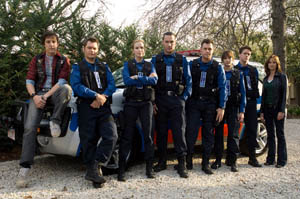 The crew of the Tactical Response Team. At least from the 1st season
Advertisement:

Made in Melbourne, Australia, from 2008 to 2011, Rush is an action-drama series that revolves around the Tactical Response Team. Which itself is based on the real-life Critical Incident Response Team, a branch of the Victorian Police Force.

Starring a highly skilled squad who specialize in non-lethal policing, each member is highly trained to deal with high intensity situations with their ability to 'think laterally in the heat of a crisis' with the back up of comprehensive intelligence and modern technology to enable to be one step ahead of criminals and suspects without letting the Victorian Police resort to deploying the Special Operations Group. Tactical Response deal with all sorts of situations, even a few within one day. These include (and are not limited to) chasing offenders in high density traffic, defusing bombs and dealing with armed criminals. Even protecting politicians and witnesses.

Unlike most shows, the series is more character driven than most action series and brings a sense of realism and the consequences of ones actions. As well as dealing the stress of such a demanding job, we go into the lives of the characters and sometimes see them while they're off the beat. Either way we witness the tension, the drama and the run about ways of patrolling the streets of Melbourne.

Not to be confused with the USA Network medical drama, or the 1974 Australian drama about the Victorian gold fields.